Unique, Innovative and Professional. Desco is a stand-out example of industry brilliance!

More than 45 years of commitment, to a broad spectrum of industrial and engineering companies, has placed Desco at the forefront of the supply arena. Since inception in April of 1976, management and staff have worked tirelessly to ensure an unparalleled offering of Supply and Service Excellence.

The vision of the founding owners, David and Val Walters, gained momentum in 1982 when their son, Russell, joined the team. Under his direction, Desco was able to chart a course of success and indeed, survival, under often arduous trading conditions. The Desco culture, stood it in good stead against aggressive and sizeable opposition. It seemed that the offering of personalised service, along with a commitment to reliable supply, was exactly what the industry was looking for.

Supply and Service Excellence became the tag line for success. The entire team hold to this imperative. No excuses! This ensures a reliable and predictable offering to the loyal customer base.

In 2004, the decision was made to invest in one of the industries greatest assets. Dan Hasted joined the Desco team, fresh ‘off the tools’, having completed his Boilermakers apprenticeship. The rest, as they say, is history!

Dan’s tenure has been nothing short of outstanding! He quickly adopted the Desco culture and passionately continued the drive towards success. He was instrumental in the decision to align Desco with premium suppliers and trading partners. Under his direction, Desco has embraced new and innovative technology, as it expands its customer base and supply offering.

His diligence has been ably supported by his wife Micky, allowing a tangible, measurable impact upon overall performance of the Desco team and trading success.

Dan was rewarded with appointment to General Manager in March 2021. Micky has embraced the role of Administration Manager, and together, their vision and future expansion for the company, can only be described as exciting!

Desco is the definitive example of people, working with people. Despite the emergence of electronic trading capabilities, Desco will continue to offer personal attention to the industry. Unique, Innovative and Professional. The way it should be! 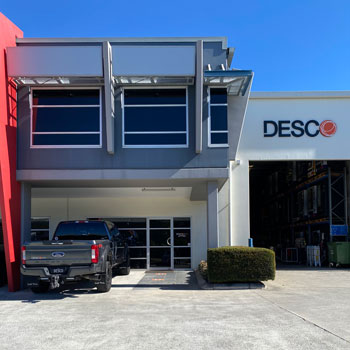